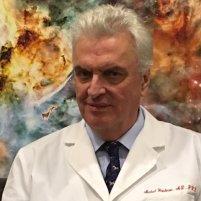 A tremor is a symptom of several different neurological conditions. For diagnosis and treatment of tremors, patients in New York, New York can see Michael Hutchinson, MD,PhD, a neurologist at New York Core Neuroscience.

What is a Tremor?

A tremor occurs when a patient has an unintentional, rhythmic movement in one or more parts of the body. The muscle contractions cause to-and-fro movements or shaking. Tremors are most common in the hands, but they may also affect the arms, head, trunk, and legs. Some tremors affect the face, and some affect the voice, causing a quavering sound when the patient speaks. A tremor may accompany certain diseases, like Parkinson's disease, or occur in isolation.

Neurological disorders like Parkinson's disease, head injuries, or stroke can cause tremors. Some medication side effects result in tremors. In many cases, however, a tremor develops in otherwise healthy people for no obvious reason. A tremor is more likely to occur in the middle-aged or later years, and both men and women are equally subject to the condition. Excessive alcohol use and an overactive thyroid may cause a tremor. Genes may play a role in some tremors which are inherited, but in many cases the cause is unknown.

Are There Different Kinds of Tremors?

An essential tremor is the most common form; it is most likely to affect the hands. Although symptoms usually occur after age 40, it can appear at any age. Sometimes called a benign essential tremor because it has no real effect other than in the hands, it can also affect other parts of the body like the head, trunk, and legs. A Parkinsonian tremor results from brain damage and the classic symptom is a “pill-rolling” movement in the hands. A dystonic tremor is a neurological movement disorder that can affect people of any age.

How is a Tremor Treated?

In most cases, tremors cannot be cured and must be managed medically. Medications are usually specific to the particular tremor. A Parkinsonian tremor, for example, is usually treated with medications that mimic the effect of dopamine, a neurotransmitter in the brain. Other medications may include tranquilizers and antiseizure drugs. Most patients are advised to eliminate stimulants like caffeine. Physical therapy may help by improving coordination and muscle control. In rare cases, when patients don't respond to any other form of treatment, surgery may be an option.